My first movie review for 2017 and in general will be for the 2017 film, Burning Sands. This review contains spoilers. 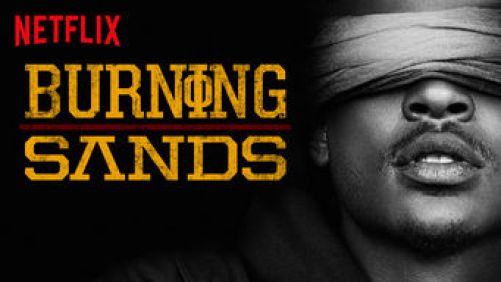 Burning Sands is the feature length directorial debut from Gerard McMurray and is distributed through Netflix. The film is about 5 young men who are experiencing, “Hell Week” the final week in the pledging process for a fictional black fraternity at an HBCU. The boys go through extreme and abusive hazing in their journey to become members of the prestigious fraternity. The protagonist, Zurich, is played by rising actor, Trevor Jackson. Zurich’s father had pledged in the past but later dropped before he could cross over so it seems that Zurich is fulfilling what his father could not finish. As the hazing process intensifies and starts to affect Zurich’s body, relationship, and school work, he starts to question the process and how bad he really wants it.

Now, I didn’t pledge nor did I have the desire to pledge so my knowledge of black Greek life is small. I’ve seen School Daze which was one of the first films, maybe even the first to bring black Greek life to the forefront in the 80’s and I like many others have heard stories about the extreme hazing and the mistreatment as well as the brotherhood/sisterhood and support for the community. I saw the trailer before watching the film so I knew this would be a dark film. 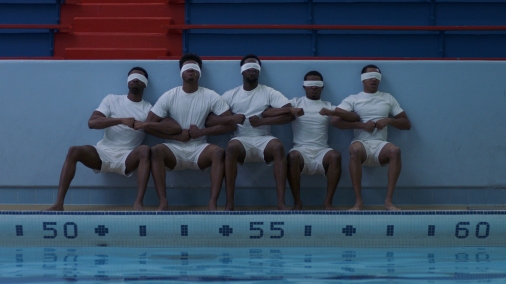 I could tell the cinematography would be amazing from the trailer alone. The aerial shots of the campus and the bodies of water were smooth and gave a sense of the rural location. My favorite scenes in particular were the intro of the pledgees in the woods, the pool scene, and the entrance into hell night. The shot of the pledgees running to get in formation moved perfectly and set the mood for the film; the green and the black were very vivid. The water level cinematography in the pool scene matched the erratic feeling. The scene where the guys enter the barn for the hell night was intense as well. Again, I could feel it even in the trailer. The way the camera went from still to shaky as it followed behind the guys added that level of chaos that followed. A lot of the tracking shots from behind reminded me of the film, Moonlight. It placed the viewer right along the journey with the protagonist. 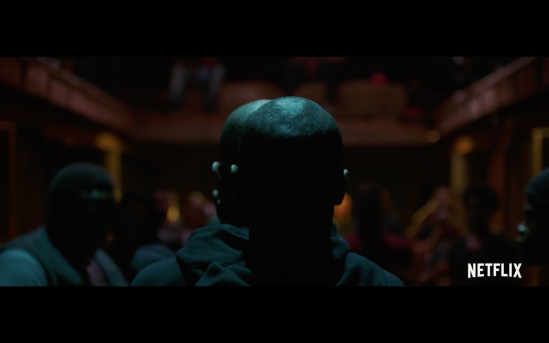 Some of the scenes were a tad bit dark specifically the party scene and the scene where the guys were confronted by the cops in the woods. I felt like it added a sense of realism but at the same time some of the actors got lost in the sauce with all that lovely melanated skin. During the party scene, I thought the tracking shot that followed Rotimi’s character right before the line dance (?) lingered for a little while. 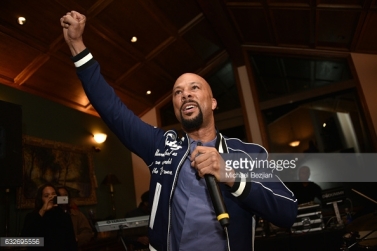 I was actually surprised at some of the copyrighted songs that were featured. I didn’t think the film was going to use current popular songs. Ju Ju on that Beat is my little guilty pleasure but the original beat, Knuck If You Buck, got me hyped. I can literally listen to that song every week and still love it. As I read on Twitter, that scene was a little unrealistic because most claimed the fraternities stroll to this song at any given moment. Then, my song Wicked came on! It’s not a party until some Future is played. From what I’m learning, the stroll to Down for My Niggaz, is also a common thing for fraternities. Rapper, Common also contributed an original song entitled, The Cross, which features Lianne La Havas. This came in at the credits after a very emotional moment and it was very fitting. As far as sound goes, the pool scene stood out to me. The thud of the water mixed in with the muddled voice-overs blended very well.

I have no cons about the music

Characters/ Acting/Writing (Toss up of Pros and Cons) 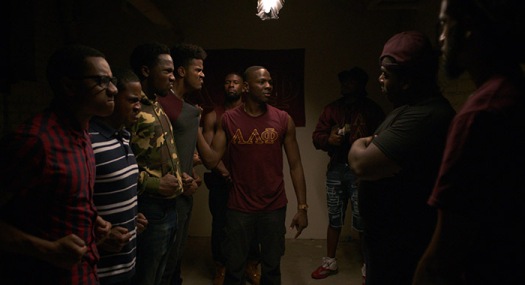 All of the actors had great performances. Kudos to the line brothers for staying in those menacing characters. It takes a lot of vulnerability and patience to play these characters especially the pledgees. In a way, the actors had to go through the same hazing rituals as their characters did and what I heard in an interview, some of them were actually hit with some real blows.

I would like to personally thank the casting director for choosing the beautiful Trevante Rhodes and all his deliciousness for this film. I loved that his character was included because it gave a sense of normalcy that was missing from the other big brothers. He teetered between going along with the hazing tradition and stepping in when some things got out of hand. My only issue was the inconsistency of his authority. He seemed to stand his ground in the shower scene against Big Country but lost all authority in the paddling scene so that was a little confusing. 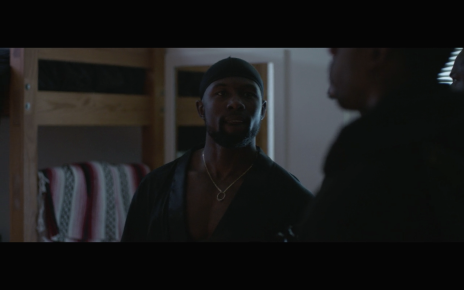 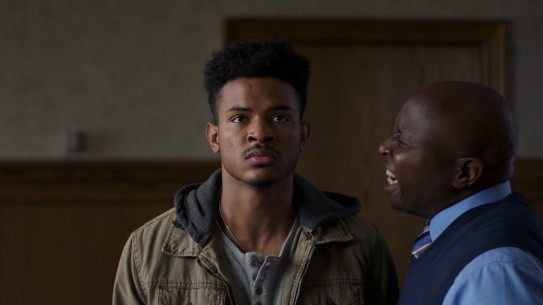 I think Trevor Jackson did very well as the protagonist. He was able to transition from his laid back demeanor to the fraternity sets in a snap. His delivery in the last shot perfectly captured the emotion of the tragic ending. Zurich’s lack of urgency and common sense was a bit much. I understand that he is young but he made a lot of stupid mistakes that he and his line had to ultimately pay for (they would have probably went through it anyway so idk). He didn’t have as much growth as I thought he would.

My biggest issue is the fact that Frank had actual growth that was missing from Zurich. In the beginning, he made it known that he didn’t have or want a brotherhood with the rest of his line brothers. As the film progressed, he changed and ultimately sacrificed his life for his brother which was devastating. 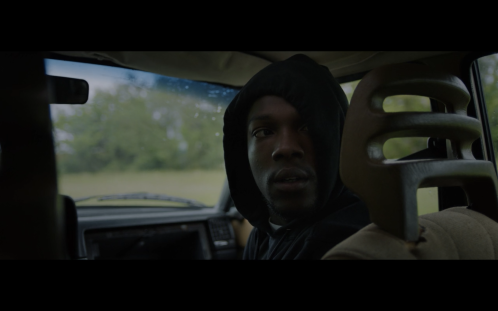 I understand that the film is not going to dig too deep into all 5 of the line brother’s lives but I would have loved to see more from the Christian pledgee. He literally had around 5 lines. I thought the scene with Toya could have been a perfect moment to show the pressure of sex for his character. This could have highlighted another extreme action that many young men have to endure. 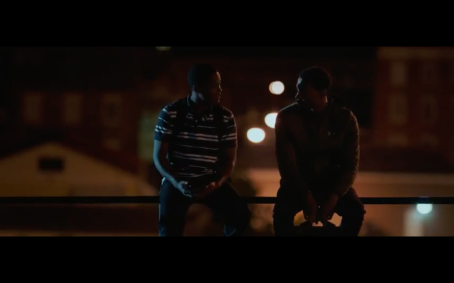 The women in the film were just meh to me. The sorority girl, Angel, was very unnecessary; she seemed intrigued by Zurich but it went absolutely nowhere. Her little dance scene with him was awkward and she showed how delusional she was for thinking he wanted her. Alfred Woodard’s character, Professor Hughes, was ok. I liked that she showed support without beating him over the head but I felt something was missing. I would have liked to have seen a conversation between her and Dean Richardson as they seemed to have different views on pledging. 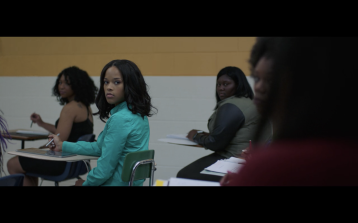 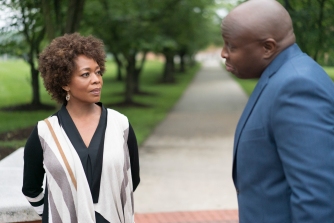 Zurich’s girlfriend, Rochon, was beyond annoying. I get it, you want to spend time with your man but it’s literally a week! It would have been nice if she worried more about the bruises on his stomach and why he was having difficulty breathing but her character took a cliché narrative. The only thing I could think of is that she was completely oblivious to what pledges have to go through. At one point, she asks, “What do they have you doing?” So, maybe she didn’t understand that he had to be attentive at any point of the day for his frat.

Now, Toya. Toya, Toya, girl. Right off the back, I was annoyed by her intro as the black girl popping gum with a slight attitude. I don’t know how many times I’ve seen this but it’s getting old. At first she comes off as a thirsty groupie but her scene with Zurich showed she had some depth, I guess? I don’t really find using the word “noble” mind blowing but the scene was funny. My biggest issue with this scene is her nonchalant attitude about the sex with the whole line. I think it’s fine to be sexually free but the film ignores the mistreatment and more than likely rape that happens to women during this process. I understand that there are tons of women who are ready to do whatever for the attention of the frat but I feel the film could have explored the concept of women being pressured or forced into having sex with these men. Maybe the director didn’t want to add anymore negative images of the frat life or maybe he didn’t want to emulate that pivotal scene from School Daze. 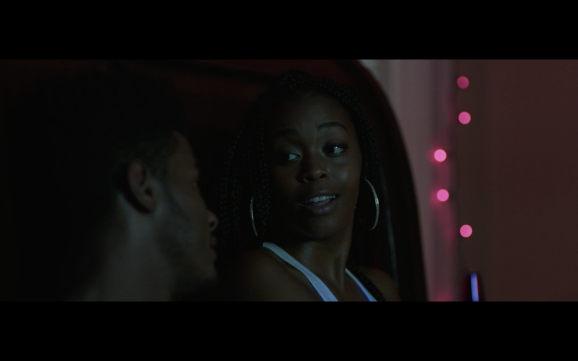 My main issue with the film was the overall goal of Zurich. From the look of the trailer, I thought throughout the process he was going to finally take a stand to the harsh treatment of the hazing. At one point, Professor Hughes tells Zurich that he should lead his brother’s from the underground back to where his fraternity was meant to be. This line should have been introduced earlier and ultimately been the goal of Zurich. He grew to an extent by telling his line brothers that they were worth more and should change the future of the hazing tradition but it fell flat when he continued to hell night. This could possibly open a door for a sequel. Another note, I understand the concept of, “We come from Kings and Queens”, in the context of how people of African descent have been treated in America. We have to use different methods to uplift our people but at the same time with every King and Queen came thousands of workers, peasants, and even slaves so we might want to use a different method.

Another issue I had was understanding some of the fraternity language and actions. I didn’t understand what being on the yard meant. Maybe it’s just me. I didn’t know what GDI was until Angel broke it down. Also, the relationship with the big brothers outside of the college was confusing. At first, I thought they were members of their family who happened to pledge but then I realized these were mentors who were part of the fraternity.

The visuals, acting, and music of the film were great. The casting made sense. Some of the female characters needed more depth or should have been excluded altogether. The same goes for some of the big brother’s who put them through hell. The growth of the protagonist could have been fleshed out better. The ending was very emotional and brought a sense of realism to the film. I think that this film is very important in hopefully putting an end to the extreme hazing issues across all fraternities and organizations outside of college. Hopefully, no current pledges are getting it worst because of the film. I think Gerard McMurray and all involved made a great piece and I hope to see more from him if he’s still breathing after the backlash of the film.